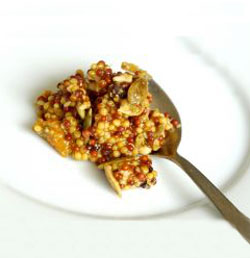 But with the hundreds of different types of mustard available, most at just five or ten calories a tablespoon, it should be enjoyed every day of the year.

A Little Mustard Trivia…
The origins of mustard are lost to history, but it is a Northern Hemisphere plant, the seeds of which have been found in Stone Age settlements. Egyptians tossed the seeds onto their food, and sent King Tut to the great beyond with a goodly supply in his tomb. The Sumerians ground it into a paste and mixed it with verjus, the juice of unriped grapes. Wealthy Romans ground it and mixed it with wine at the table. Cultivated for thousands of years, mustard was the primary spice known to Europeans before the advent of the Asian spice trade: Westerners had mustard long before pepper, which originated in India. Once trade routes were established, ancient people from India to Egypt to Rome chewed mustard seeds with their meat for seasoning.
There are about 40 species of mustard plants. The ones used to make the commercial mustard products are the black, brown and white mustard. White mustard, which originated in the Mediterranean basin, is what largely ends up as bright yellow hot dog mustard; brown mustard, which originated in the Himalayas, is the basic Chinese restaurant mustard served in America and the basis for most American and European mustards; and black mustard is popular in the Middle East and Asia Minor, where it originated (it needs to be hand-harvested, so isn’t used much in the West). The mustard plant is in the same family as broccoli, Brussels sprouts, collard, kale and kohlrabi.